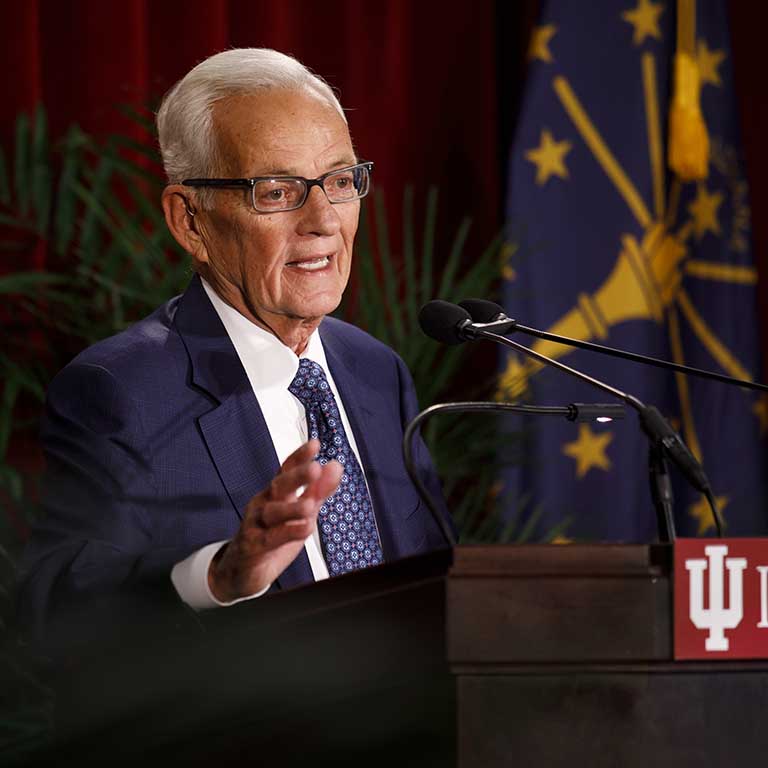 Paul H. O’Neill didn’t graduate from the O’Neill School, but his impact cannot be overstated.

O’Neill earned an undergraduate degree in economics from California State University, Fresno and worked as a computer systems analyst with the United States Department of Veteran Affairs. He earned his Master of Public Administration from Indiana University in 1966—six years before the founding of the school that would later bear his name.

“In 1965, the government sent me to IU for a yearlong master’s program in public policy,” O’Neill wrote later in life. “To have this time for study and thinking was the opportunity of a lifetime for me. During my year at IU, I learned how to structure my thinking and how to develop systems of data gathering and analysis that have been invaluable throughout my life.”

He joined the United States Office of Management and Budget in 1967, serving as the deputy director from 1974-77.

He then served as vice president and president of International Paper Company, chairman of the RAND Corporation, and chairman and CEO of Alcoa. In 1998, he co-founded the nonprofit Pittsburgh Regional Healthcare Initiative to address problems of regional healthcare, and, in 2001, he was appointed the 72nd secretary of the U.S. Department of the Treasury by then President George W. Bush. O’Neill returned to the private sector as part of the Pittsburgh Regional Healthcare Initiative in 2002, and in 2005, he founded Value Capture, which works with healthcare providers to improve patient safety and lower costs.

O’Neill never forgot his roots. In 2014, he provided a $3 million gift to the then-School of Public and Environmental Affairs to support the creation of a new graduate center, which opened in 2017. Two years later, the school was renamed the Paul H. O’Neill School of Public and Environmental Affairs by IU in recognition of O’Neill’s distinguished career in both the private and public sectors and his $30 million gift to support programming at the school.

“Over half a century ago I was afforded the opportunity to come to Indiana University, which I count among the great good fortunes of my life,” O’Neill said during the ceremony announcing the renaming. “Here, I encountered an endless feast of learning alongside wonderful faculty and students dedicated to the noble calling of public service. My education at IU was instrumental in preparing me for all that followed throughout a diverse and meaningful career.

“I am honored to now have the opportunity to give back to this exemplary institution, which means so much to me. My hope is that the school remains a place of excellence where future leaders can combine passion with action and develop the confidence they need to engage with society's greatest challenges and opportunities.”

“Paul lived a life that was genuine and inspiring,” said O’Neill School Dean Siân Mooney. “He knew what all great leaders know, and that was to lead by example. Whether it was eschewing a corner office for a cubicle or giving his home phone number to those in charge of workplace safety, Paul knew that his most valuable assets were the people who worked for him, and he worked tirelessly to ensure they had the safest work environment possible. Paul was a visionary who led with conviction, and we couldn’t be prouder to carry on his legacy of selflessness and the pursuit of excellence.”

Read more about the legacy of Paul H. O'Neill